The photos on this page have been taken during a business trip in and around Shanghai (上海) in May 2011. Most of them were taken on a sunday, because that was the only time we weren’t meeting with people or travelling.

The comments are interspersed between the pictures. They belong with the picture above. 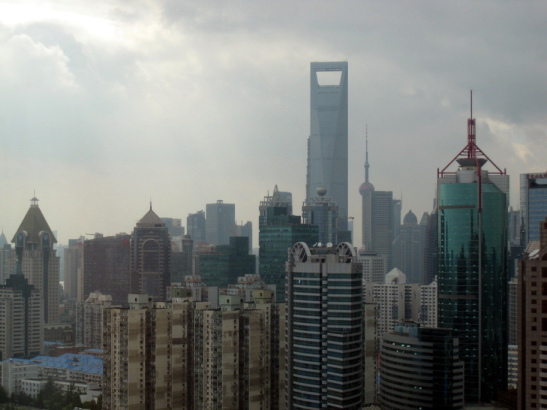 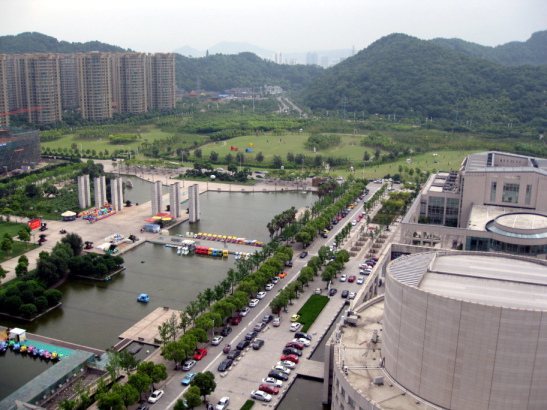 On the left the skyline of Shanghai from my hotel room. The building that looks like a giant beer bottle opener is currently the highest building in Shanghai, the Shanghai World Financial Center (SWFC).

We visited a mould maker in Taizhou (台州), Zhejiang. On the right is the view from my hotel in Taizhou. 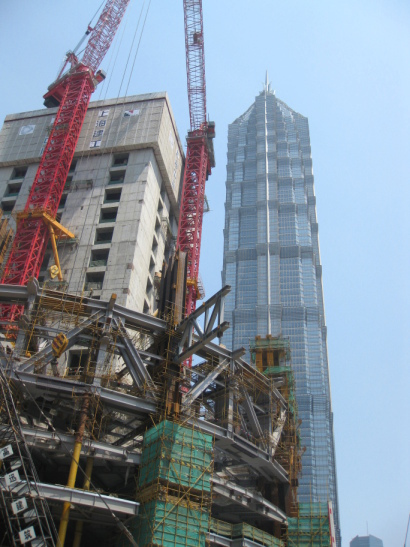 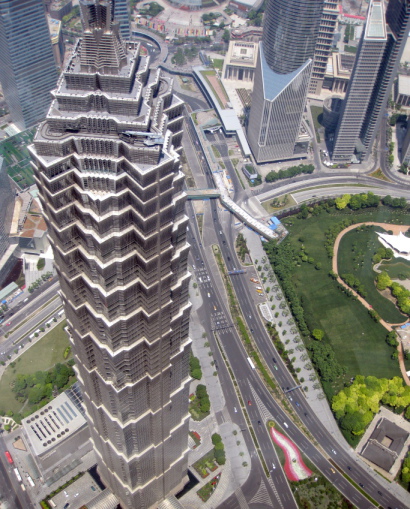 The Shanghai Tower under construction, with the Jin Mao tower in the background. The size of the vertical support beams is absolutely huge!

The Jin Mao tower, as seen from the SWFC. Before the construction of the SWFC this was one of the highest buildings in Shanghai. 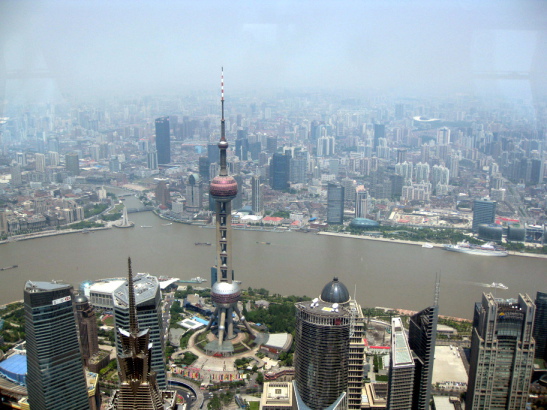 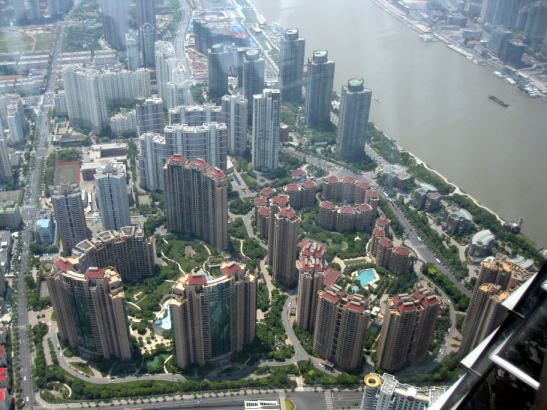 A view of the Puxi skyline from the SWFC. I was told that this is an exceptionally clear day in Shanghai, even if it looks kind of foggy to most of us.

This is the appartment complex where my boss used to live when he worked here in Shanghai. An appartment there could cost US$3000/month! 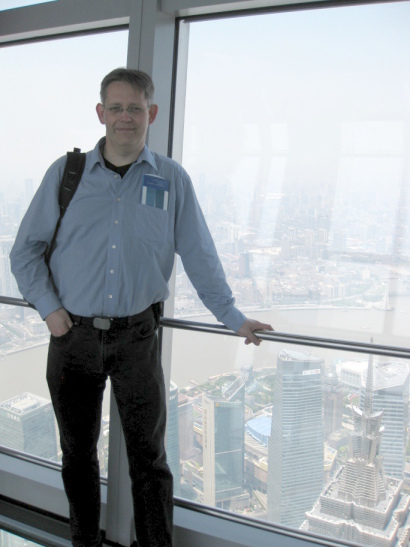 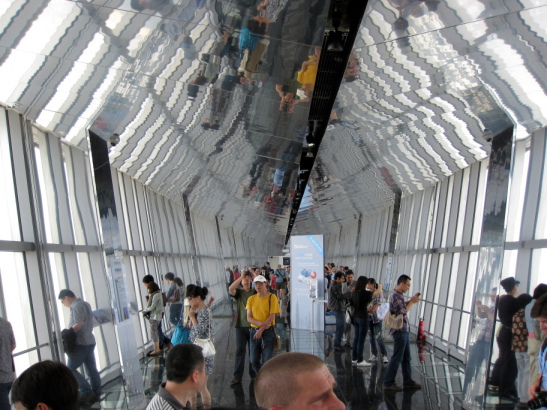 The viewing gallery in the SWFC. This is the top of the gap in the SWFC building. 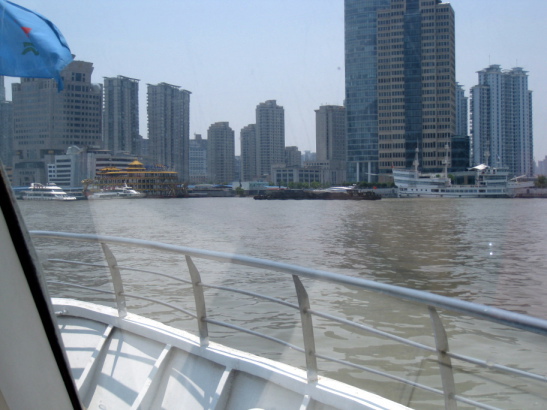 Onboard the ferry from Puxi. A coal barge on the river. It looks like the skipper and his family are living on the boat. 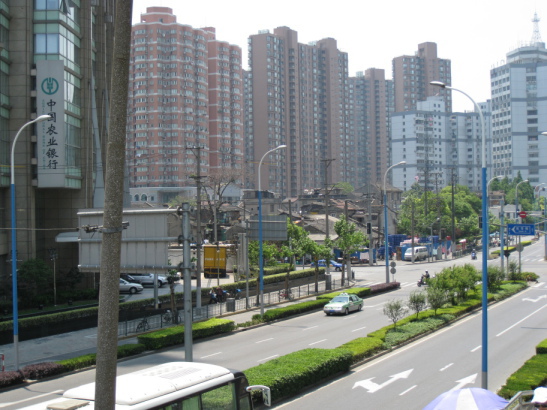 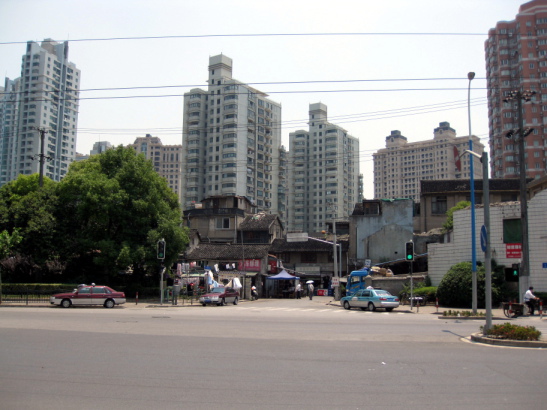 Coming off the ferry, we see some remaining parts of the old Shanghai, lost between the highrise buildings. We walked through the old quarter. 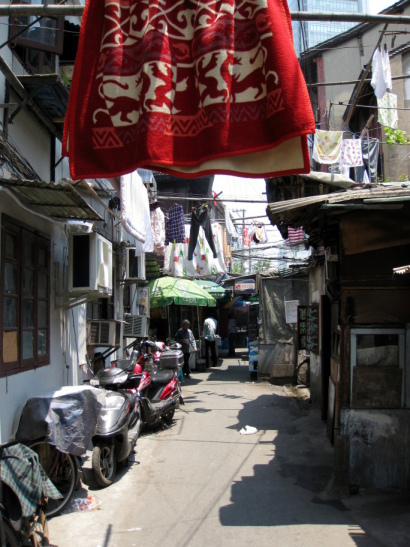 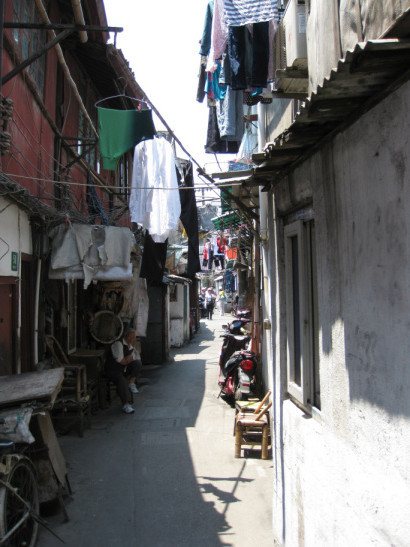 This is actually one of the wider streets. Washbasins were tucked away in odd corners. The second picture is much more typical of what we passed through. 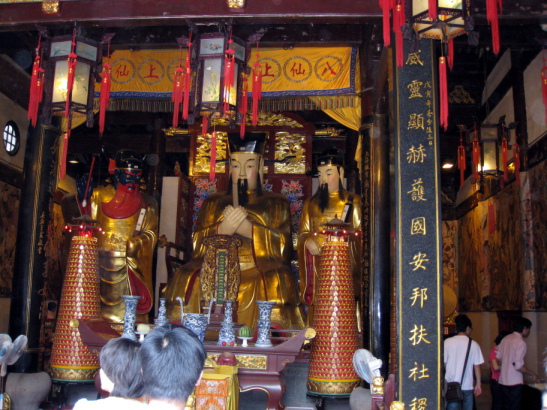 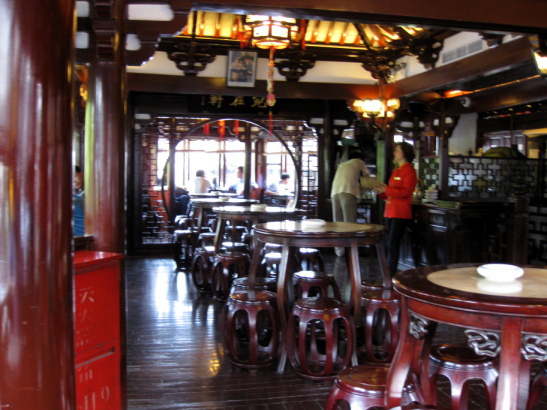 The interior of the restored city god temple (城隍庙), now again a Taoist shrine. Later we drank a very nice tea in the old shanghai teahouse. This is the interior. 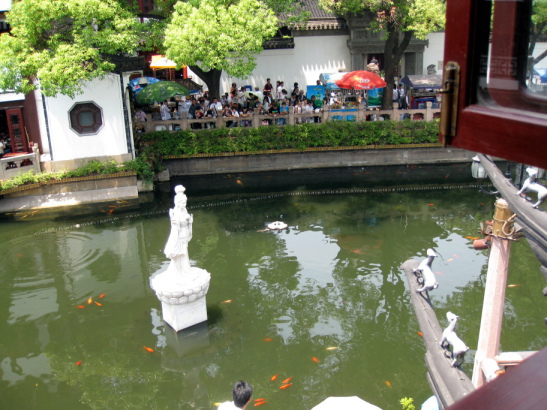 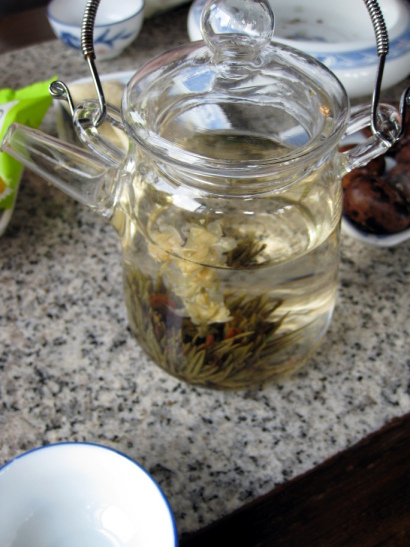 The tea house is sitting in a pond. The surrounding walkways and bridges were absolutely packed with people, so we were glad to find room inside. I ordered jasmine tea, which arrived in a little teapot with a small cup and lots of hot water to top it up. It was quite nice. 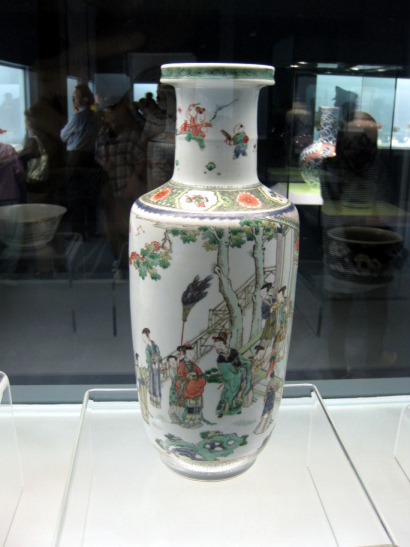 The outside of the tea house, with the SWFC in the background hidden by the haze.

On Sunday we had a day off and I visited the Shanghai Museum (上海 博物 馆). When I was about 12 years old, I was introduced to the Judge Dee novels, and read all of them with great interest. Since the character of Judge Dee was based on the real Tang Dynasty official Dí Rénjié (狄 仁傑), I especially looked at the Tang dynasty artefacts. This vase is one of them, IIRC. If you are intersted in chinese art and artefacts this museum is definitely worth your time! 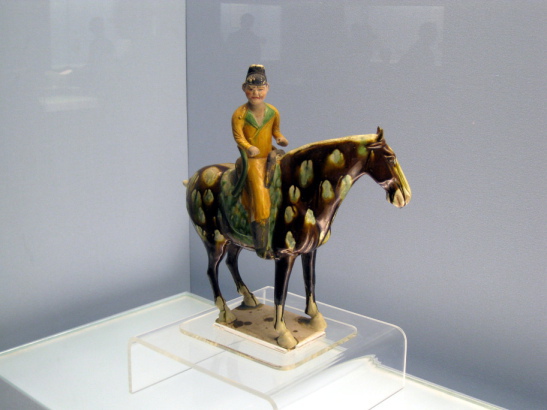 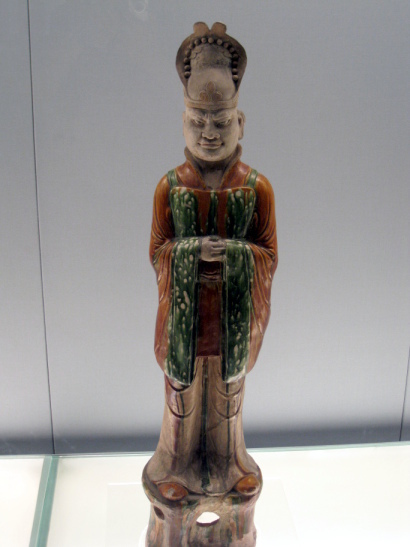 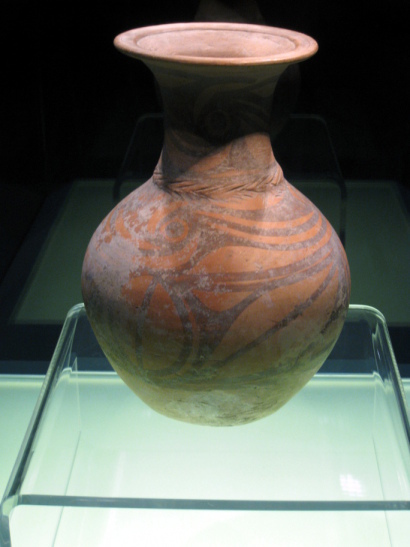 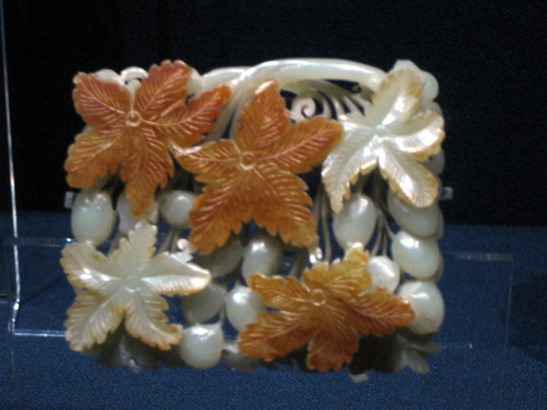 An interesting kind of vase. The colors and decorations were not something I’ve seen before from China.

Also a beautifal carving in jade. Especially interesting is how the artist used the natural colors in the material to color the flowers. 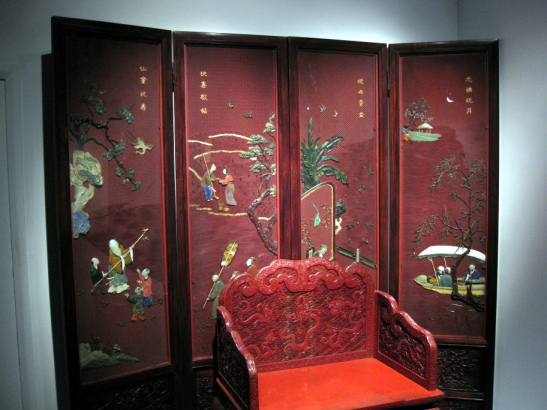 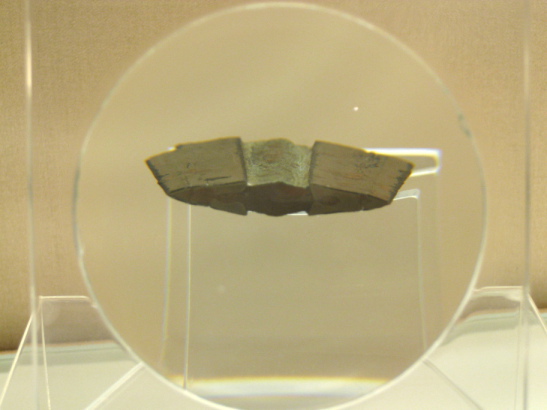 A beautliful lacquer screen with jade inlay. It reminded me of the Judge Dee novel The Lacquer Screen.

And an interesting piece from the transition from bronze to iron; a cross-section of a bronze sword with iron edges. I’m assuming that the bronze was cast with the iron placed in the mould. 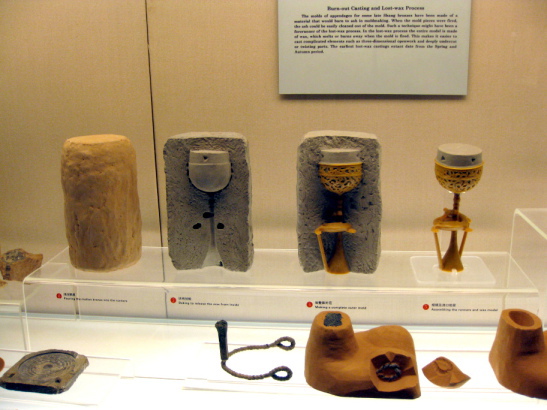 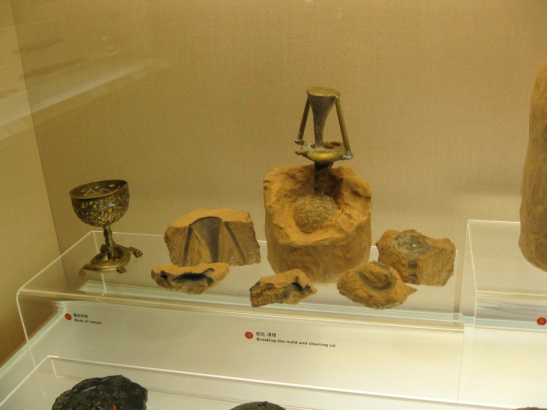 Some pictures of the lost wax casting technique. 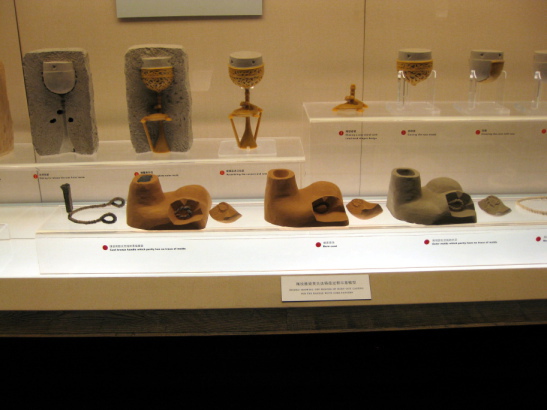 At the right a pot with a cast-on handle. The handle model was made out of rope and was burnt out when the mould was fired. 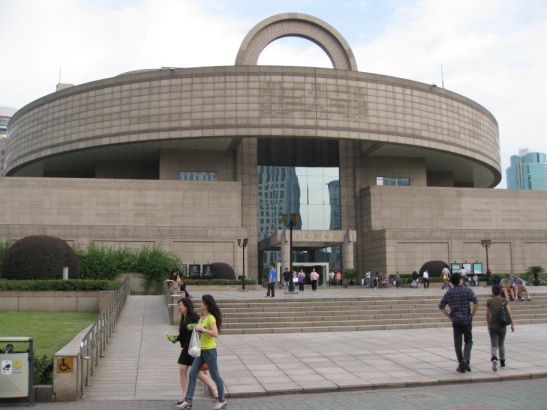 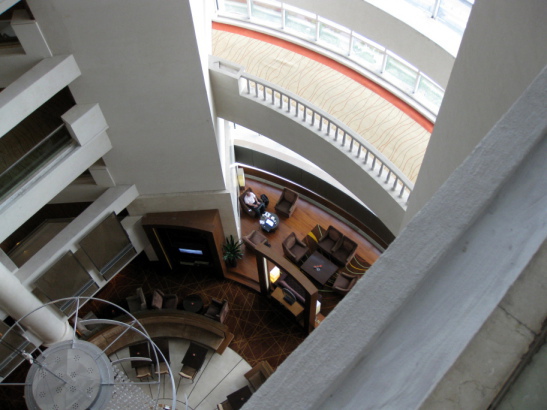 Left the outside of the museum. The round top sitting on the square bottom said to symbolize the ancient Chinese perception of “round sky, square earth”.

The afternoon before flying home we were working in one of the lounges of the hotel. I went up to my room to get something and took this picture on the right.

Riding a pair of Scorpion Trikes  →