Based on the data from the dashboard I’ve created a graph of the power consumption for a 2020 Zero DSR.

As far as possible, this was measured on a level road at constant speed, on a good road surface and without much wind. The power is the product of the speed in km/h and the energy usage in Wh/km.

There can be some variation in these figures depending on things like wind, slipstreaming et cetera. Note that this is in a custom mode, not eco or sport.

Although honestly the most significant power usage increase is caused by acceleration. It’s not uncommon for a good bout of acceleration to make your charge indicator drop a percent. This should be no surprise. 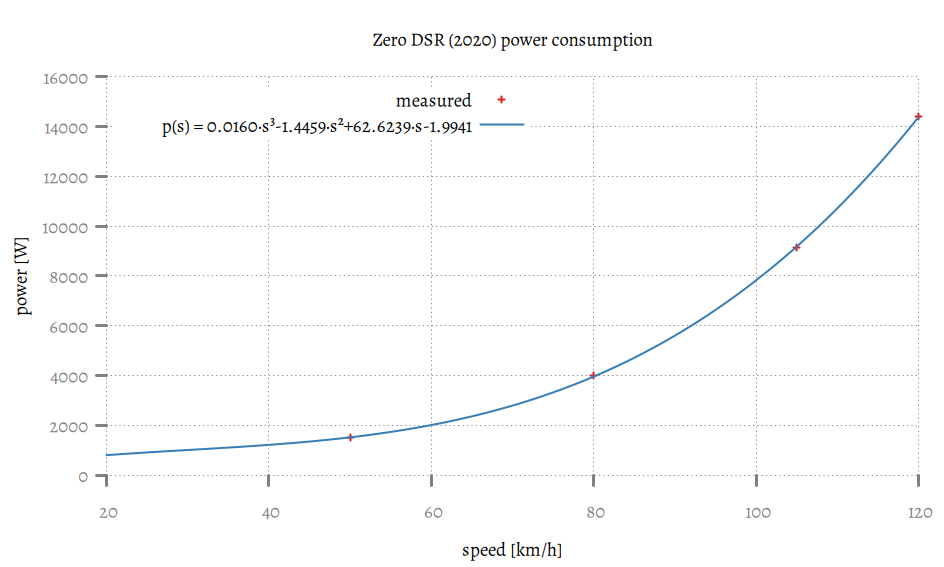 Initially, I tried using a second degree equation to fit the data since that is what one would expect for rolling resistance plus air resistance, but the fit was poor. That is the reason I’m using a third degree equation. Since I don’t have data in the 0—20 km/h speed range, I’ve left that range out of the graph.

When it’s cold I use the heated grips. This does not show up in the graph because I suspect the current used for that isn’t measured. The only thing that I can say is that it doesn’t seem to affect the range. Or if it does, the effect is overshadowed by others. A single trip to work and back (≈50 km) takes between 30% and 40% of battery charge depending on the weather and how enthusiastically one flogs the throttle.

It is interesting to compare that to a combustion engined motorcycle. Before I bought the Zero, I had a BMW C650GT motor scooter. At a constant speed of 100 km/h, the on-board computer would report a fuel usage of 3.6 L per 100 km. (As an interesting aside, the fuel usage as reported by the on-board computer was almost constant between 80 km/h and 110 km/h, which yields a power of 26.9 kW to 37 kW at those respective speeds.)

Given an energy content for gasoline of 33.6 MJ/L, this works out to 33.6 kW of chemical input power. That puts the efficiency of the combustion engine plus CVT at around 24%, which sounds like a reasonable value to me for a small combustion engine. Large combined-cycle gas and steam turbines can almost reach 50% thermal efficiency, while a pure steam turbine reaches 40%.

←  Commuting on a zero DSR