The purpose of this program is to calculate some properties of fiber-reinforced composite laminates. It calculates:

Although these properties are not very difficult to calculate, (the relevant equations and formulas can be readily found in the available composite literature) the calculation is time-consuming and error-prone when done by hand.

Below is a sample of the program’s output, formatted with LaTeX. 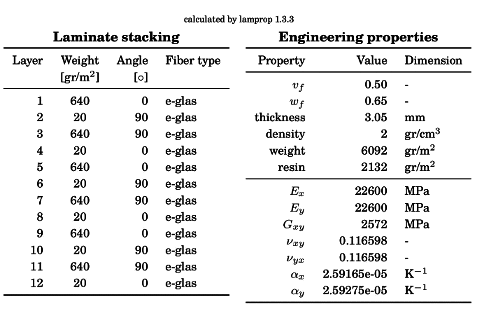 The precursor for this program was a spreadsheet that I wrote because of the aforementioned tedium in doing laminate properties caclulations by hand. This worked, but had significant limitations in the sense that it could only handle a fixed number of layers, and that the spreadsheet calculations sometimes did not yield the correct result!

So I wrote lamprop in C. By design the output was printed by a single function, so it was easy to implement e.g. LaTeX and HTML output next to plain text.

As an exercise in learning the language, the author ported the program to the Python programming language. This proved to be a much cleaner, more maintainable and shorter implementation.

Additionally, the generally hard to obtain transverse fiber properties were replaced with properties derived from the matrix.

In 2015, the source repository was published on github.

In version 2.0 the software was ported to Python 3. Also the internal API was completely reworked. The different output formats were made more consistent. Text output on ms-windows avoids using unicode output since cmd.exe doesn’t handle that well. Output in rich text format (“RTF”) was added.

From version 2.1, the laminae in the output are numbered from 1 instead of 0.

Support for old style fiber properties (which also specified properties in the radial direction of the fiber) has been removed from the code. The reason for that is that such radial properties are generally not specified for anisotropic fibers.

The internals have been updated to use

The current version is written in python, and requires at least version 3.6. It is not compatible with Python 2! It has no library requirments outside of the Python standard library. As of end of 2020 it is being developed and tested using Python 3.9.

The installed scripts are an archive of compiled Python bytecode. This was done to make the installation on non-UNIX platforms easier. This means that you have to re-install lamprop after updating Python to a new version.

The following references were used in creating this program;

The latest version is found on github.