This is the first part of a series of articles where I hope to show how to analyze deflection and stress in structures using the free CalculiX software. I’m using version 2.17. The focus will be on sandwich structures because that is the area in which I’m most interested. Compared to parts consisting out of a single material this is a bit more tricky as we will see in this article. The main reason for using finite element analysis (“FEA”) in general is that it allows for complete analysis of problems where no integral solution exists.

Additionally, some of the assumptions used in Euler–Bernoulli beam theory for analyzing deformation and stresses in beams and plates do not hold for sandwiches.

What is a sandwich?

In structural engineering a sandwich is a composite structural element designed to withstand large bending loads relative to its light weight. Generally it consists of two relatively thin skins made of a stiff and strong material separated and connected by a light-weight core. This core can be e.g:

Additionally there is another light-weight construction in the form of discrete “stringer” plates set perpendicular between the skins. This is normally not considered a sandwich, though.

The stiff materials on the outside makes these elements structurally efficient at withstanding bending loads.

Please note that this article is not an introduction into FEA for mechanical engineering! There are plenty of good books and free online resources for that. The book “Applied Mechanics of Solids” by Allan F. Bower is a good reference for solid mechanics. A web-version is available for free. It covers the principles of FEA for static linear elasticity in §7.2 and in more detail in §8.1.

CalculiX is an excellent free finite element software suite consisting of a pre- and post-processor called cgx and a solver called ccx. The capabilities of the solver compare favorably to much more expensive FEA software. But like all FEA software it has a pretty steep learning curve. Both the pre- and post-processor and the solver are programmed using a domain-specific language (“DSL”). Both of those are well documented in their respective manuals. The solver basically uses the same DSL as the commercial Abaqus FEA software.

For people new to CalculiX I would recommend the excellent repository of examples by professor Kraska.

The CalculiX pre- and post-processor is called cgx. As a preprocessor it can be used to create 3D geometry and mesh it. It is not a 3D CAD-package, however. While it can be used to generate very complicated geometry (as witnessed by the small jet engine that can be found in the examples), this is not trivial.

Nevertheless I would still advocate using it wherever possible. The main reason is that it allows you to build completely parametric models that are trivial to change. This allows fast turnarounds for iterative design, which is for me one of the main use cases of mechanical FEA. It also creates structured meshes that produce excellent results.

If you want to analyze an existing geometry in the form of a STEP-file, I would recommend using gmsh to create a mesh and boundary conditions for the CalculiX solver.

Creating the geometry and mesh

In this example we will create a mesh where the elements representing different materials share nodes. This is the simplest way of generating such a mesh, but it has a significant disadvantage that we will cover later.

In general I would advise to use a simplified geometry for FEA. For example small holes and radii generally lead to a lot of small elements being necessary to model them correctly. This leads to very large meshes and thus a longer time necessary to solve the problem. In most cases their influence on the solution is small.

FEA software generally doesn’t care about which units you use, as long as they are consistent. In my FEA calculations I use SI units to avoid problems.

The example below is in the DSL for cgx. First we define the parameters that define the design.

Here, ttop and tbot are the thicknesses of the top and bottom skins. The rest of the values should need no explanation.

When creating lines we have to give the number of “divisions” in those lines. These are basically hints for the mesh generator. Note that when using second order elements (more on that later) two divisions are needed for one element.

Lastly, we have some calculated values in the form of the core thickness.

Here hc is the height of the core. The t intermediate is used because the valu command only allows calculations with one operator and two operands.

Next we get to actually generating the geometry. This follows a pattern that we see often in cgx examples.

The main reason for doing it this way (IMO) is to ensure that opposing edges have the same division counts and so can be automatically meshed without problems.

The swep command is a very powerful one. For example, the direction of the sweep is arbitrary and not necessarily perpendicular to the line or plane that is swept. Check the documentation for its different options.

Another thing to keep in mind is the use of sets. A set is basically a name for a collection of geometric entities, from solids back to points. We will use sets to later on assign different properties to different elements. First we create the bottom skin, encompassed in the set bot.

Next, we create the core on top of the bottom skin.

And finally the top skin.

In this case top_t is the top surface of the sandwich we will use later.

Now comes the time to mesh the solid bodies. We will be using 20-node brick elements with reduced integration. This is a very well-behaved second-order element for these kinds of simulations. It has nodes on the corners of the brick, but also in the middle of the edges. See the CalculiX documentation for details. Note that the names of elements between cgx and ccx is not the same, which is somewhat confusing. In the pre-processor cgx this element is called “he20r”, while the solver ccx calls it “C3D20R”. Creating the mesh is now very simple.

(Note that “all” is a special set that contains all geometry.) Now that the elements are created, we need to define sets of nodes to apply loads and constraints. To define the constraint, we first create a set that only contains all nodes. Then we enquire which of those nodes are located at x=0.

The set “fix” contains all the nodes at one end of the sandwich.

Now we need to save the nodes, elements and sets in a format that can be read by the solver.

The first line creates a file called all.msh in which the nodes and elements are defined. Note that the set names are prefixed by a capital letter defining the art of the set. So the pre-processor set all is split into a set of all nodes called Nall and a set of elements called Eall.

The next the lines create node and element sets for the bottom skin, core and top skin respectively. They are called bot.nam, core.nam and top.nam. The element sets in those files (named Ebot, Ecore and Etop) are later used to assign different material properties to the elements.

We want to apply a distributed load to the top surface of the sandwich. Loads and constraints in FEA can actually only be applied to nodes, but the CalculiX solver will automatically convert a distributed load on a surface to loads on individual nodes in the surface.

This is more complicated than merely dividing the total load equally over the number of nodes! Especially for second order elements. See the CalculiX solver manual for details.

Lastly, we export the surface to a file named top_t.sur.

An image of the mesh is shown below. The colors indicate the nodes for fixation and the load surface. 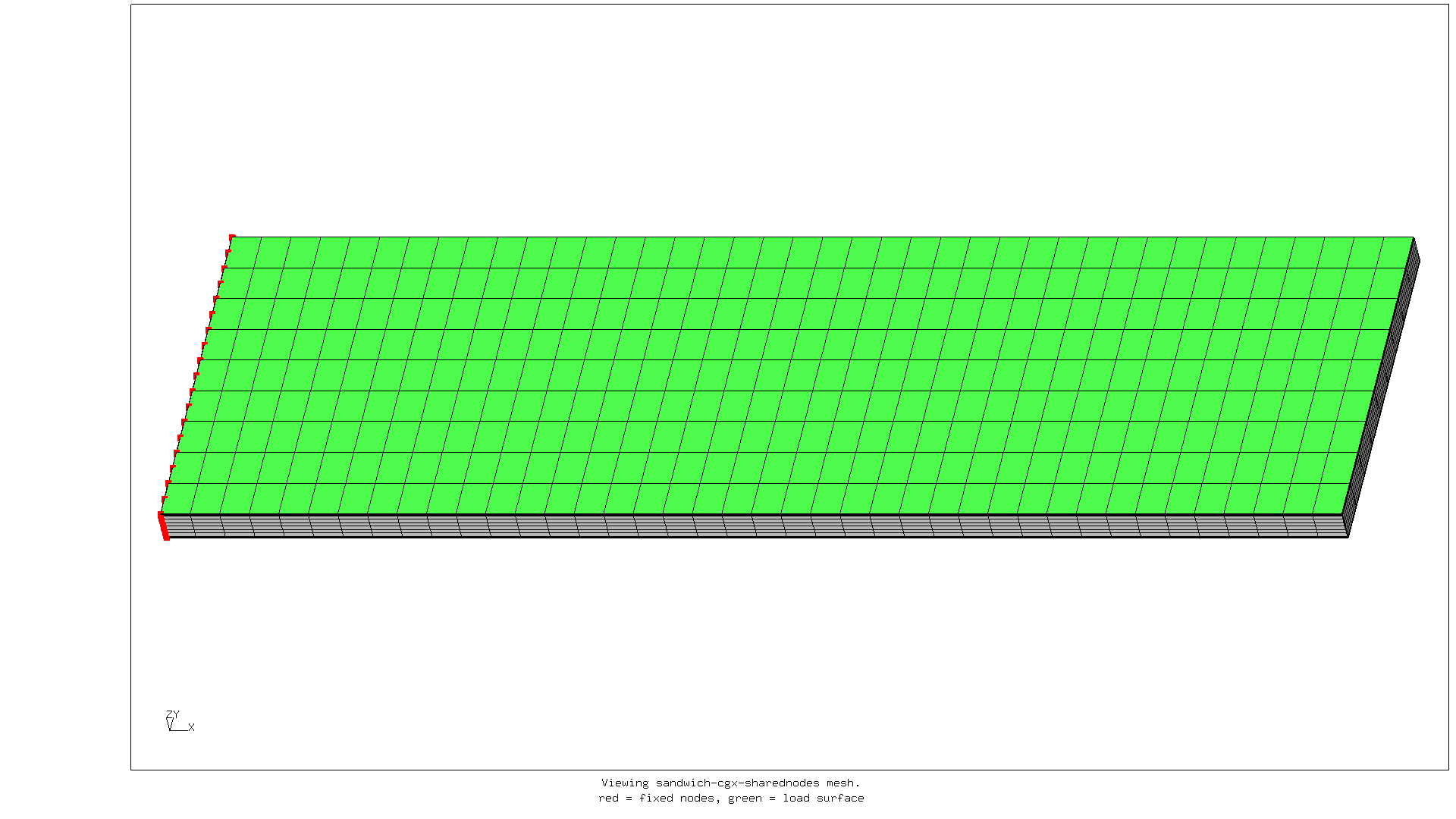 Now that the mesh has been created, the analysis has to be defined in the DSL for the CalculiX solver ccx. The commands for this DSL are documented in the manual for ccx.

Comments in this file format start with ** in the first column. Commands start with a single *. The file starts with a heading, followed by a one-line description.

Next we need to include the nodes, elements and sets defined in the pre-processor.

The nodes from the set fix.nam are used to fix the mesh in three directions.

Before we can assign materials to elements, we need to define them.

In this case specifying the density is not strictly necessary. But I like to include it in case it is needed. Now we can assign the material to elements.

In this case the top skin is made of structural steel and the bottom skin is made out of 5754 aluminium. Why? Basically because we can. The core material is Rohacell 71IG, a high-end foam that is often used in structural sandwich construction.

This is a calculation of the behavior of the sandwich under a static (constant) distributed load. For every node the displacement and reaction force is stored. For every element the stress and mechanical strain is stored.

On a UNIX-like system the solver is run as follows, assuming that the input file is named sandwich.inp.

The time program is used to capture the time and memory used by the solver. The env command creates an environment variable that instruct the solver ccx to use the multithreaded spooles equation solver.

On my workstation (with Intel i7-7700 CPU) the solver run for this input takes around 7.5 seconds and has a maximum resident set size of approximately 1 GiB.

Viewing and assessing the results

The ds command determines what is displayed. Entity 3 of dataset 1 is usually the displacement in Z-direction.

It is also possible to just start the post-processor with the result file: cgx sandwich.frd, and then use the menu and interactive commands to change the display to the image below. It is just more convenient to combine this into a single command-file.

The cgx display for the displacement looks like this: 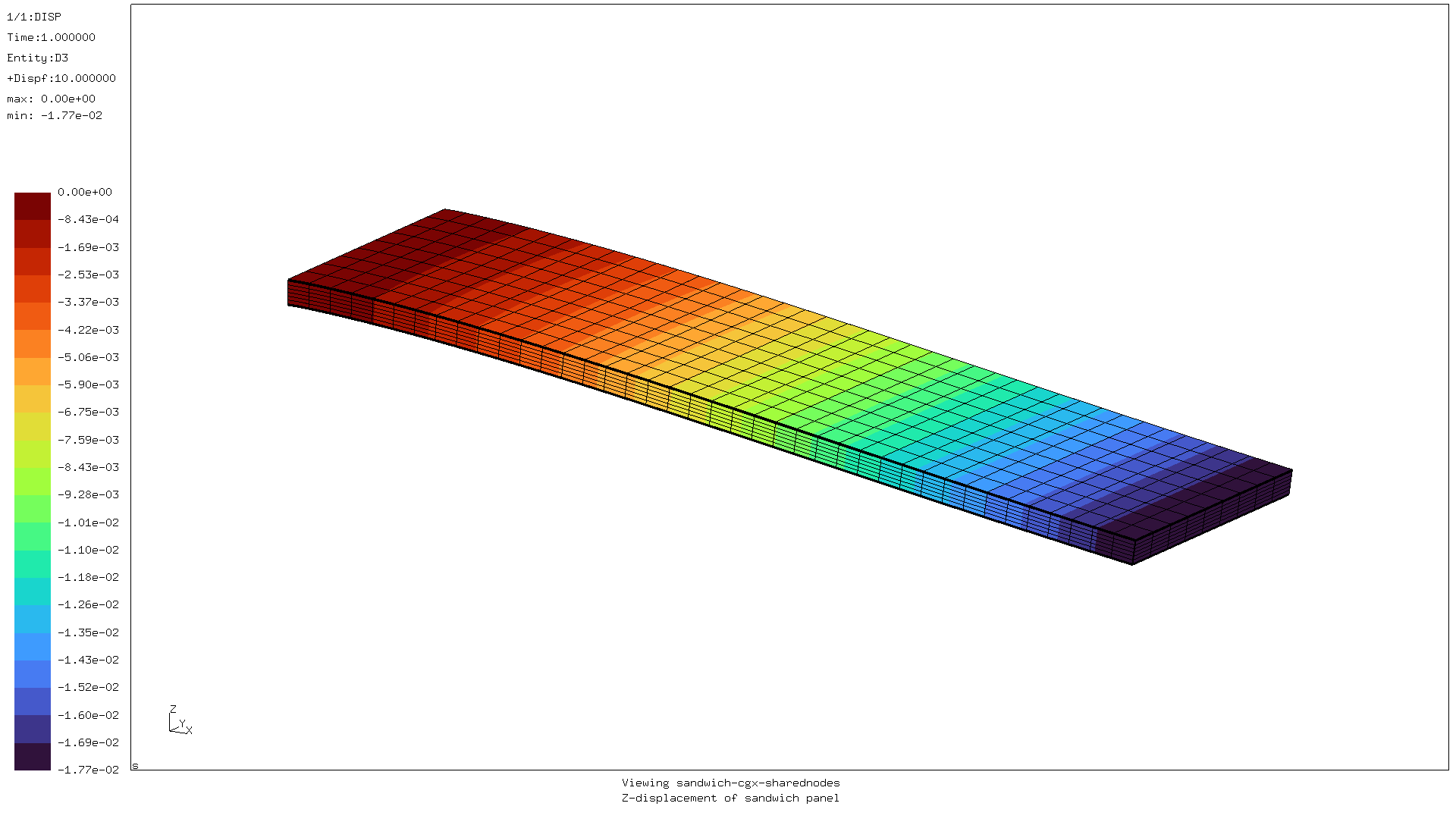 The deformed sandwich has the shape one would expect. The Z-deflection matches the value found when analysing this sandwich as a clamped beam (when shear is taken into account). 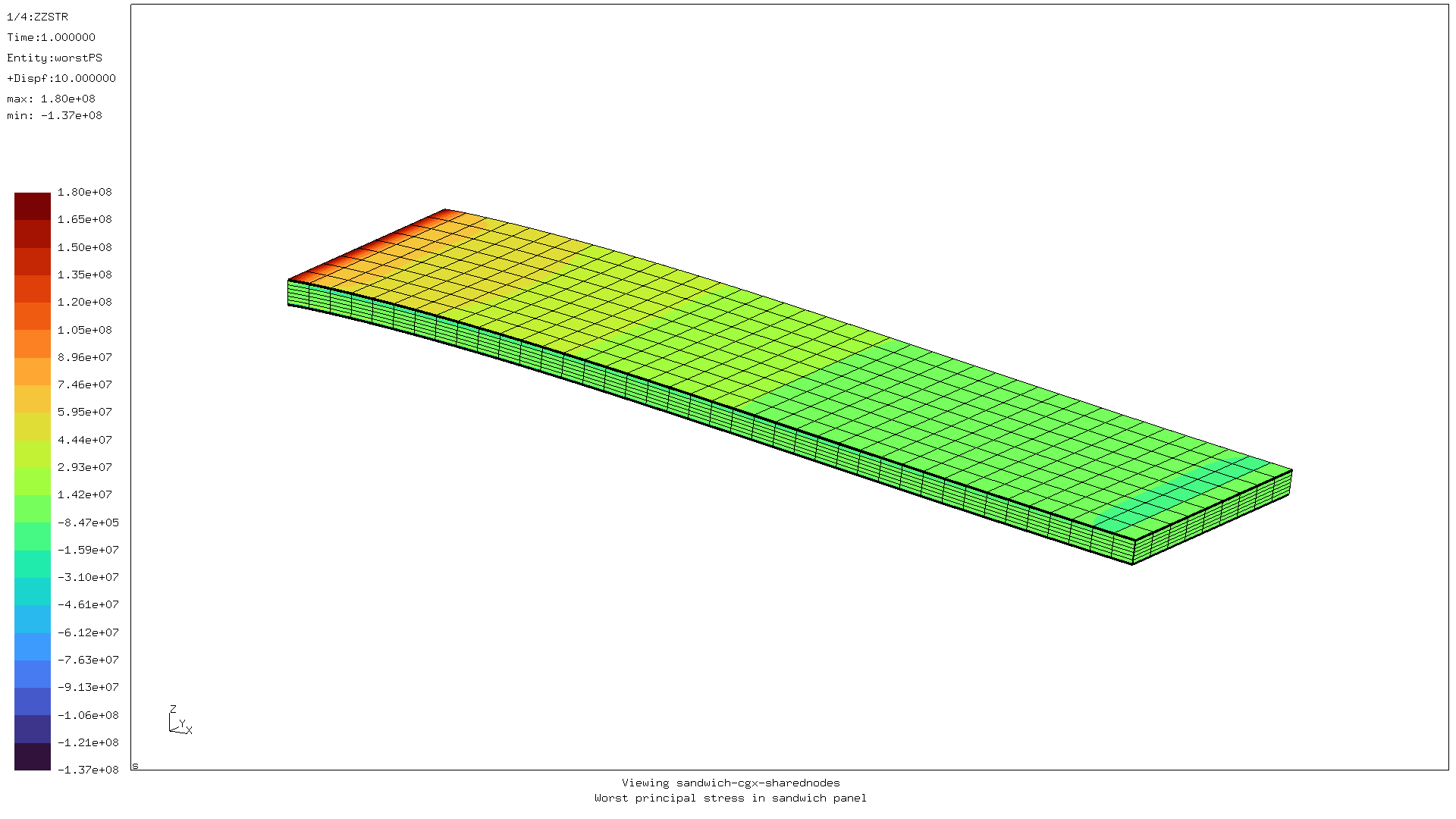 However, when we switch to a detailed view of the von Mises stress near the clamped end, we see something odd: 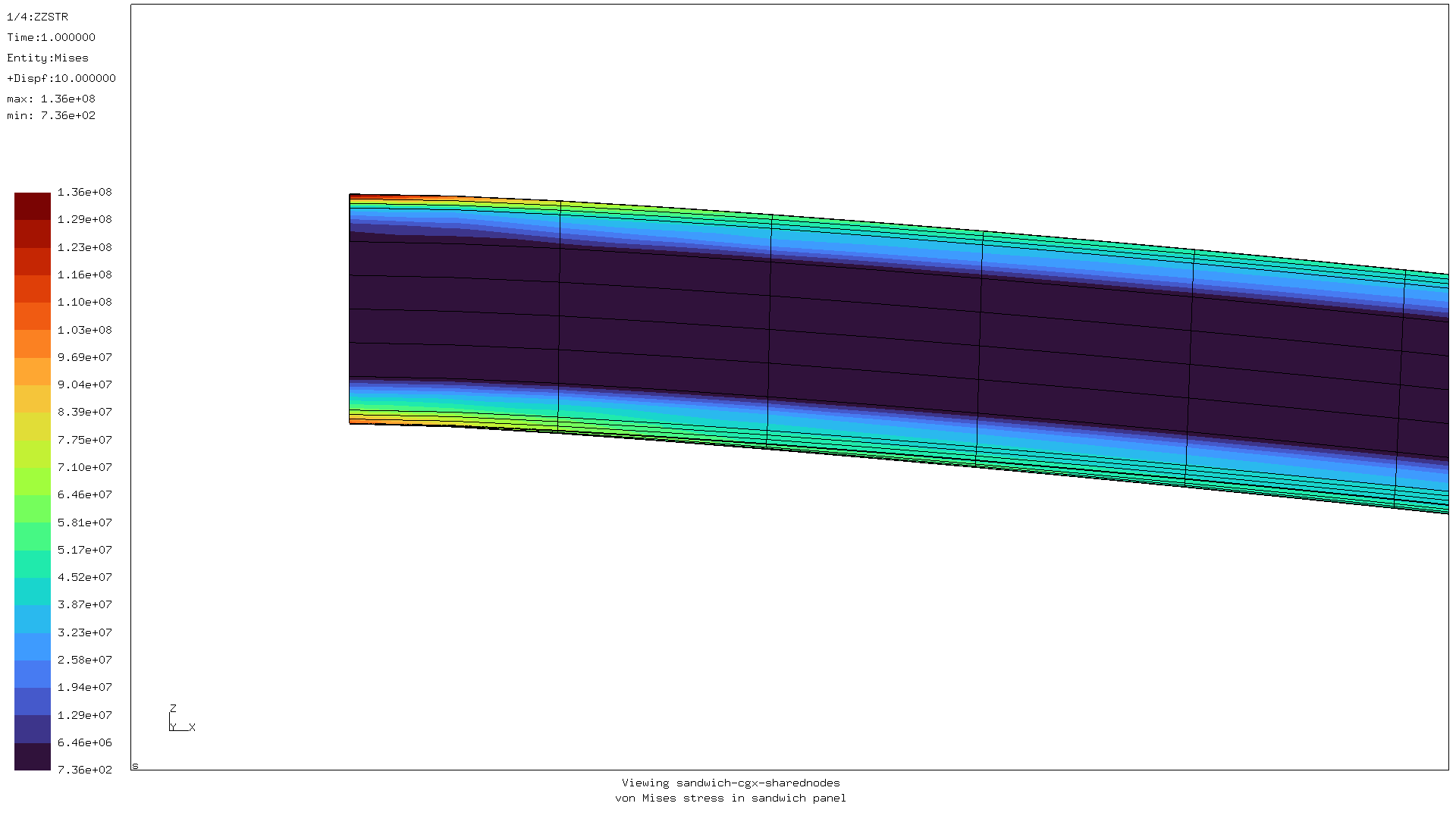 The stress from the skins “bleeds” into the core. Since the Young’s modulus of the skins is about three orders of magnitude larger than that of the core, this does not happen in reality.

Now it becomes important to understand how FEA works. Essentially, this method finds the displacement of the nodes based on the definition of the elements and the external loads. Based on these deformations, the stress in the integration points inside the elements are calculated. These are then extrapolated over the whole element and its nodes on the outsides. Finally, the values on the nodes from all adjacent elements are averaged.

It is this final averaging step that causes the problem in this case. To prevent that, we need to make sure that the skins and the cores do not share nodes. For a realistic result, they do have to be connected though. This can be accomplished using equations or *TIE-constraints. How this is done will be shown in a later article.

←  Why I think engineers should be programmers FEA with Calculix (2)  →